The coronavirus pandemic has affected all sectors of the economy with some sectors having a harder time than others. The impact of the pandemic can be said to be unprecedented. Although rents in Hong Kong residential market started to slide in the middle of last year, prices however are still at a high level. If we go back to the early stages of the pandemic, everybody was holding a wait-and-see attitude on the property price movement with some even hoping that prices would plummet as much as what we saw during SARS in 2003. However, things did not pan out as expected with rents falling but not prices. This only means that the rate of return is going to drop further. However, if we look at it, from a macro-economic view or from the micro view of rate of return, why do Hong Kong property prices have this kind of performance? With the strange situation of the property market as it is now, how do we examine it in order to really understand it?

Game players in the residential market

Property prices are determined by transactions between buyers and sellers. However, we cannot just focus on property indices. If we do not take note of trends and changes in the transaction volume of the property market, we will not be able to learn of the true situation. 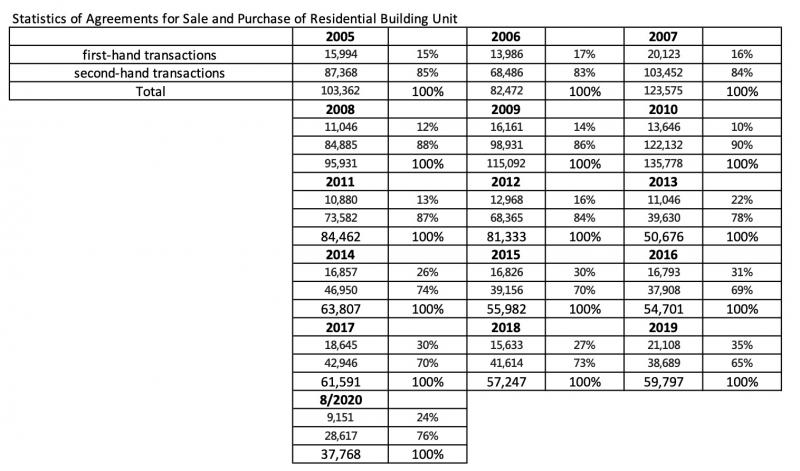 According to the above table, since 2013 property transactions have totalled about 50,000 to 60,000 per year. There is a significant difference when compared with transaction volumes of nearly 100,000 each year previously prior to 2013. What exactly does the 50,000 to 60,000 transactions per year reflect? What is the meaning behind these statistics?

The price of a property reflects the buying power of the buyer and holding power of the seller. If the epidemic has an impact on the income of a majority of people in the market, this would have been very rare historically. However from another perspective, it can be so said, that for a small group of people, wealth and income have not been affected too much by the epidemic. We can infer then that if only it was just this small group of people that played this property game, property prices would not necessarily be affected to the same extent and drop sharply.

For any commodity, the buyer will strive for the lowest price while the seller will strive for the highest price in the transaction. Behind this are represented several factors for consideration including supply and demand within the same period in the market and the urgency to sell and purchase. Therefore, we have to start off with the situation of owners and buyers from a social perspective, and analyse the situation of the owner and buyer, before we can understand the true meaning behind each transaction.

In the Hong Kong residential market, the majority of the owners are “baby boomers”, who were born after the war. They generally refer to people born between 1946 and 1960 who benefitted from the high growth world economy at the time. In 1978, through China’s reform and opening up, the 1980s and 1990s were the golden age career-wise (for people approximately 22-34 years of age). Among them, if the family circumstances were relatively good, having chance to receive Western education, those would have good English language ability, and were able to rise to important positions in the career or society, then they could easily attain a high status.

By 2020, they have reached the retirement stage. Many of them would have already got on the property ladder while working during the 1980s and 1990s and would have generally settled mortgage loans and thus are without any financial pressure. Many of them got rich either by considerable salaries or speculating in real estate and stocks. By retirement age they would have ample retirement savings.

On entering the latter part of their lives, they will not be investing in their careers in the same way as they did when they were young, nor will they easily make high-risk investment decisions. On the contrary, they are paying more attention to health, with less outgoings on clothing, eating out, living accommodation and travel. Whereas previously when they were still young, they splashed out heavily on discretionary spending, now they pay attention to personal well-being with outgoings mainly only on medical and travel for leisure.

The pandemic has been a huge blow to many employees and employers, but it has had only a limited effect on those who have retired. Since their investment portfolios are generally prudent in nature, the volatility in the stock market has not shaken their assets. What’s more, according to statistics, about 65% of the real estate units in Hong Kong have no mortgage repayment obligations. Therefore, the current pandemic has only a very limited economic impact on these retired owners who do not have loan payment pressure, liquidity needs and reasons for forced sale.

Whether property prices will plummet depends on the holding ability of owners. If they have an urgent liquid capital need, only then will they slash prices aggressively to sell the asset as soon as possible. Only when these kinds of owners dominate the market will property prices be reduced drastically.

Therefore, with owners having no urgent need to sell their flats, and coupled with government’s anti-speculation measures to keep a lid on the property market, this has caused families who need to move to bigger flats to delay their decision to sell and buy and thus this has led to a supply shortage in the secondary market. Only when they just suddenly realise that it was a seller’s market when they put their flats on the market, would each seller be thinking the same thing, that is sell only when the price is right.

Where do the buyers come from?

Owners with no urge to sell their flat does not necessarily mean buyers have the ability to take ownership. Where exactly do the buyers come from? We can find out the answer from the distribution of earnings of employed persons in Hong Kong: 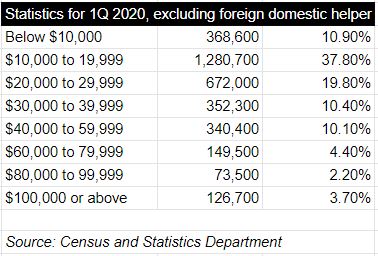 Only some high-income earners are buyers

According to Figure 2, there were 127,000 people with earned monthly income of $100,000 or more. Along with the incomes and hence spending power of the spouse and family members, they could easily absorb 50,000 to 60,000 units per year. If one added in the people with earned monthly income of $60,000 to 100,000, the number of this group would grow to 350,000. The previous transaction statistics thus reflected the fact that there were substantial numbers of financially capable people who have not entered the property market.

In other words, the 50,000 to 60,000 transactions each year represented only the basic purchasing foundation of the market. The economic circumstances and incomes of these buyers are not easily adversely affected. Although property transactions will still be affected by a bad economy, they would not just suddenly fall off a cliff edge. Instead they would be affected only indirectly and more slowly.

There is another group of owners that have not been counted in the above figure yet and those are the retirees mentioned earlier. Seeing their children move out was the reason why many of these owners of large flats decided to sell. The flat had become too large, so they needed to downsize or that their children did not have enough funds for a downpayment for their first flat. As such the parents were required to exchange one flat for two flats. The people in this newly emerging group of purchasing power who have to rely on their parents may not necessarily be high income earners. But being fortunate in having parents helping out with the downpayment, along with the low interest environment at the moment, even people in lower middle class are able to get onto the property ladder.

Even not having help from the family is no problem because there are all sorts of payment options available for first-hand residential properties that can get around the problem of not having enough funds for the downpayment. From transaction statistics, we can see that since the implementation of mortgage restrictions by the government in 2013, first-hand transactions have greatly increased as a proportion of overall transactions. 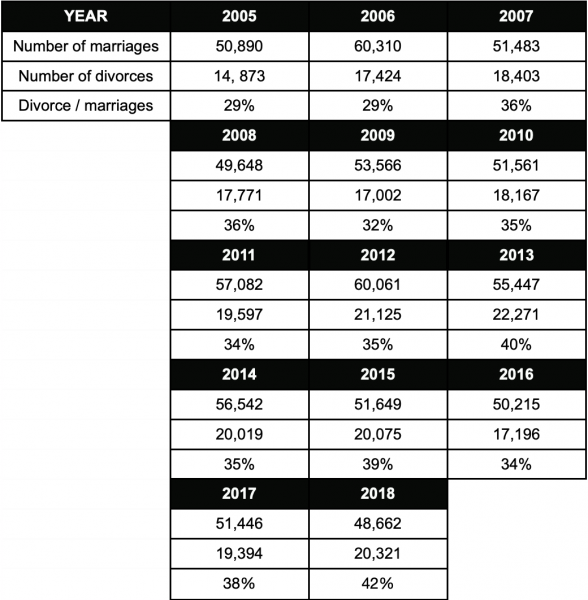 It can be seen from the table that the number of marriages reached a peak from 2011 to 2014 and declined afterwards. The reason for the drop could have been due to high property prices that caused people to postpone marriage decisions. However, the number of divorces has been on an upward trajectory.

The housing market under the pandemic has experienced the strange phenomenon of falling rents but prices staying high. This is because owners have no financial pressure, and with extremely low interest rates, the fall in rents has not affected the repayment burden of people with mortgages. The only people playing the "property market game" are a group of high-income earners. Under the pandemic, their incomes have not been as adversely affected as other people's incomes. In addition, with the property market mercilessly distorted by government policies, this has only made people postpone the decision to buy over a long period. All along, the market has been merely catching up with pent-up demand. Therefore, the chances of property prices falling sharply like in 2003 are extremely slim. Moreover, if the economy recovers, high-income earners will respond relatively faster, and there will be plenty of opportunities for the property market to cease falling and head up again.