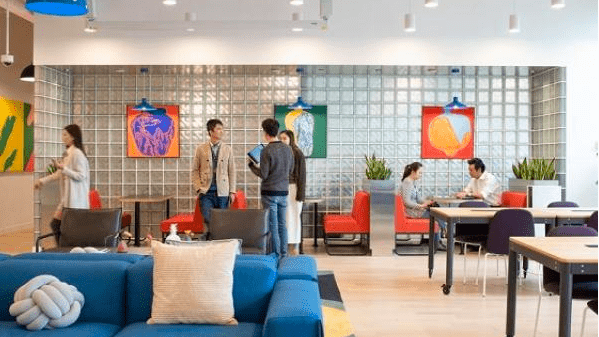 What are the factors affecting office re-entry rates in APAC?

Southeast Asian cities have not seen many workers going back to offices just yet.

With the threat of COVID-19 still present amidst varying vaccination rates across the globe, companies have adopted several variations of work-from-home arrangements. However, even as economies start to reopen and restrictions ease, employees still remain hesitant to return to the office, resulting in different office re-entry rates across Asia Pacific.

According to JLL, “while markets in Greater China have generally enjoyed high rates of re-entry in recent months, Southeast Asian cities in contrast have been seeing low re-entry rates.” 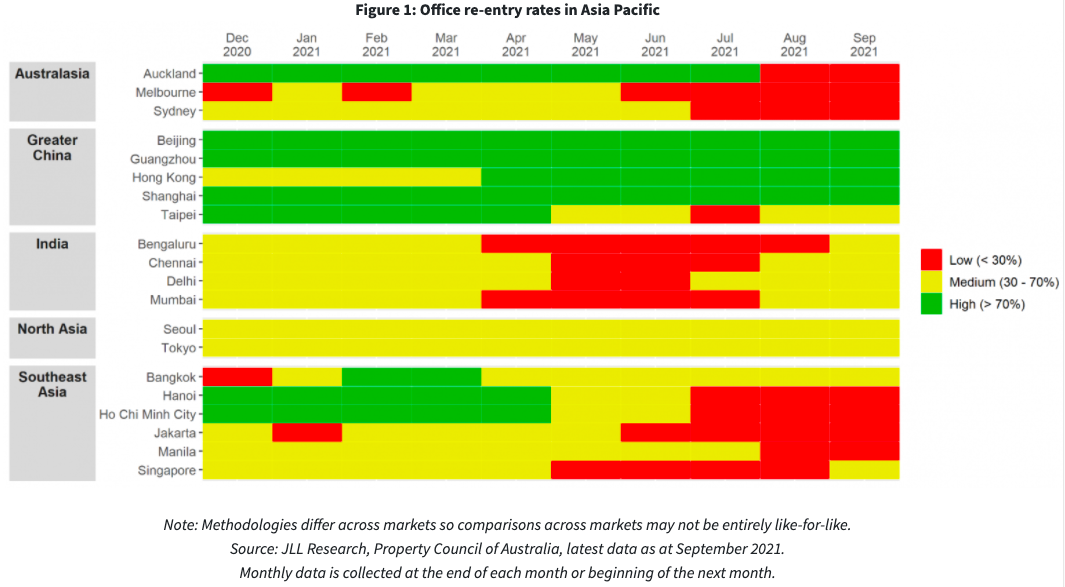 Another factor affecting re-entry rates is the strictness and nature of government measures to control the spread of COVID-19, including lockdowns and mass testing. Earlier in the pandemic, mainland China, New Zealand, Taiwan and Vietnam had managed to maintain full or nearly full occupancy as strict lockdown and quarantine measures effectively contained the spread of the virus. An effective mass testing regime in Seoul also helped keep re-entry levels relatively stable. Meanwhile, strict rules in Singapore such as work-from-home mandates and capped workplace occupancies of 50% to 75% meant that re-entry rates remained around medium or low levels.

To date, given the number of people working from home, there has been less pressure for companies to take up additional space, and hence some companies have put expansion plans on hold, reducing demand for offices. In the short term, there remains risks that office re-entry rates will be significantly impacted as a result of some markets reintroducing pandemic mitigation measures to contain the spread of future outbreaks.

In addition, an increasing number of governments in the region are pivoting to a strategy of living with endemic COVID-19 in an effort to bring life back to some degree of normalcy and boost economic recovery.

Over the longer term, demand for office spaces in Asia Pacific is highly likely to recover given factors such as offices being locations that foster a sense of community and company culture for staff, enabling employees to socialize with one another.

In the Asian context, home sizes tend to be smaller – making them less conducive to work from home – in some cities like Hong Kong and Tokyo, which further drives people’s preference to go to the office. Multi-generational households common in Asia also have an effect on how conducive to work the home environment is.

Research from JLL Work Dynamics has showed that generally employees in the region have voiced their preference to return to the office. We have also seen instances of employees eagerly returning to the office once restrictions were eased and lockdowns lifted. On the other hand, the research also showed that there are also some people who prefer working from home due in part to long commute times, such as in India, which could in turn also drive demand for satellite flex spaces.

Overall, what is likely to change in the long term is increasing workplace flexibility, as companies adopt hybrid models of working, including working from home. According to JLL’s Worker Preferences Barometer, employees’ number one workforce priority is work-life balance and flexibility in working patterns, ahead of salary. Such evolving preferences will likely further reinforce the transformation of the workplace into one that allows for greater hybrid working arrangements.