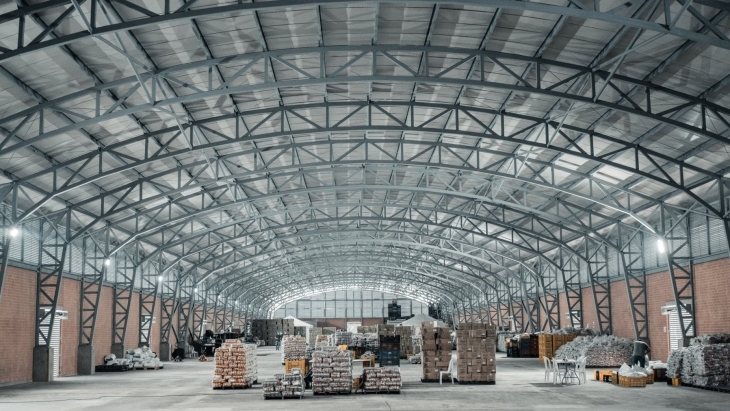 A recent report by Knight Frank reveals that for the first time in two years, median rents of multiple-user factories in Singapore expanded in Q3. Rents grew 1.6% q-o-q to S$1.80 per square foot per month (psf pm) (Exhibit 1). 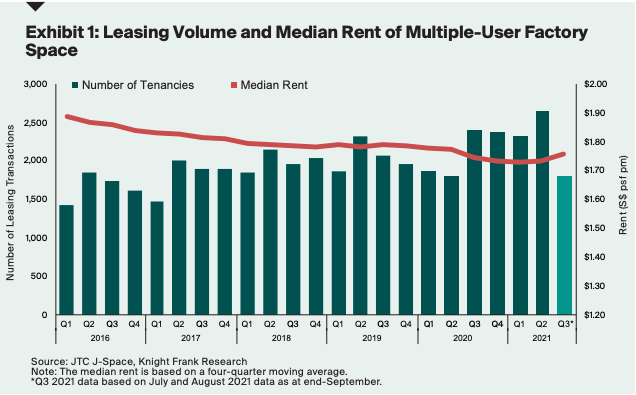 Transactional activity in the multiple-user factory segment hit a lull in Q3 2021, with transactions totalling some S$309.5 million, led by the S$11 million sale of a 10,000-sf freehold strata unit in Ann Chuan Industrial Building. Prices generally remained stable in Q3 2021, averaging about S$414 psf on the back of sustained industrial activity.

Although recent transactions have generally comprised properties with smaller quantums, more sizable deals are in the works. According to the Knight Frank Capital Markets team, larger sellers are taking advantage of improving industrial market sentiments to carry out previously planned asset disposals, using the opportunity to liquidate underutilised industrial properties. Despite the uptick in interest, it might take some time for such transactions to be reflected as these typically take around 10 to 12 months to complete.

In accordance with the government’s bid to produce 30% of Singapore’s nutritional needs domestically, further investments were made in the domestic food and agritech industries. In September, top Japanese egg producer ISE Food Holdings signed a memorandum of understanding with the Singapore Food Agency to invest S$100 million to build Singapore’s fourth egg farm. Construction is expected to begin in 2022, with facilities progressively opening from 2024 onwards.

Alternative protein production also continued to gain traction in Singapore in Q3. Esco Aster, a Singaporean contract development and manufacturing organisation, gained approval and started production of cell-cultured chicken at their Ayer Rajah Crescent facility in July. In the same vein, Chinese biotech firm Avant announced the development of a pilot production facility for cultivated fish cells in September. The research laboratory will be located in Biopolis and is expected to begin operations by 2022.

Sustained demand for pandemic-era goods, such as bio-technology components, healthcare and sanitary goods, as well as electronics components for the pandemic-induced digital transformation, will continue to draw high-value-added manufacturing investment to Singapore.

While the amount of upcoming industrial space has dropped to 53.0 million sf gross floor area (GFA) by end 2025, new supply remains substantial, with 18.8 million sf GFA and 17.3 million sf GFA expected to complete in 2021 and 2022 respectively. Nevertheless, healthy sustained demand and strong global manufacturing investment interest should allow rents to increase moderately between 1% and 3% for the whole of 2021 as expected. As Singapore stabilises from the fallout of the pandemic, factory prices and rents could potentially increase by 3% to 5% in 2022.