According to the Government's Land Sale Programme, the commercial plot New Central Harbourfront Site 3 will go to tender in the third quarter of this year. Instead of the usual highest bidder wins approach, the tender of this site will adopt a “two-envelope approach”. Developers will be required to submit separately a design proposal and a price proposal. The Development Bureau earlier further explained its scoring methodology to the Harbourfront Commission and the Land and Development Advisory Committee, in which the weightings for design and price will be 50-50. The tenderer with the highest combined score will be awarded the tender. 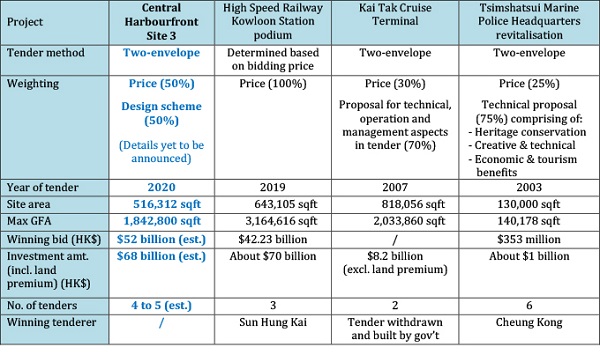 During previous tenders for the Kai Tak Cruise Terminal, the Wong Chuk Hang private hospital site (now Gleneagles Hospital Hong Kong) and the former Marine Police Headquarters (now 1881 Heritage), the government also adopted a "two-envelope approach”. As the Kai Tak Cruise Terminal concentrated on future terminal operation, the hospital emphasised quality of medical services and the former Marine Police Headquarters focused on cultural and heritage conservation, the weighting for price was not set high, at only 30%, 30%, and 25% respectively. In contrast, for the large commercial development site on top of the High Speed Rail West Kowloon Station, the scale of which compares favourably with Site 3 Central Harbourfront, the site was instead sold on the traditional highest bidder wins approach (Table 1).

As Site 3 is the only remaining large commercial site in Central and on account of its strategic location, the government believes a two-envelope approach will take into consideration the financial benefits from the sale and at the same time ensure the development plan and other illustrative materials for the site delivers social benefits. Based on the tender scoring methodology used on previous tenders that used the two-envelope approach as well as the government’s “Tender Procedures for Government Procurement”, the tenderer with the highest score for the design proposal and the tenderer with the highest price offered will be awarded full scores. The scores for the design proposals and price proposals of the other tenderers will be given in proportion by using the highest score as the basis. Finally, the scores for both parts are multiplied with the corresponding weightings to arrive at a weighted score for each part. The two weighted scores are then added together for a combined score. The tenderer with the highest combined score will be the successful bidder.

Although the government has yet to announce the detailed land use restrictions and design intentions for Site 3, the government has expressed its design perspective for the site on several occasions in the past, and so it can be deduced the scoring criteria will be based on the following main areas: 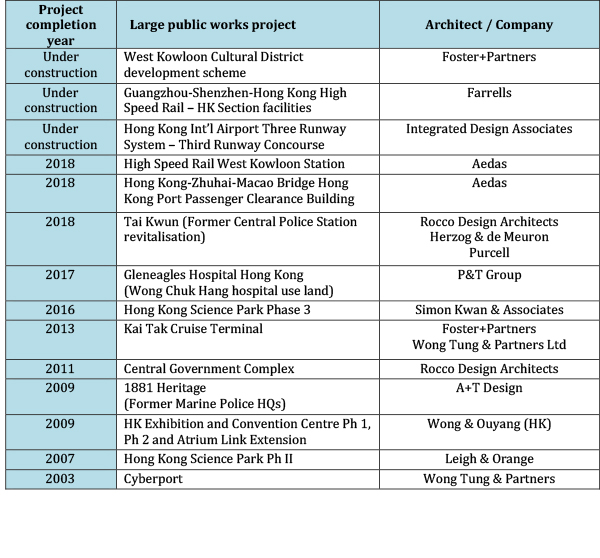 Although scoring for the design schemes would involve elements of subjectivity, for some large-scale public sector building projects, such as High Speed Rail West Kowloon Station, Kai Tak Cruise Terminal, Science Park, etc., these projects were undertaken by a number of well-known architects or consultancy firms (Table 2). It can be seen then that they all have similar ability on designing projects that require many special features and in relevant project experience.

For example, in 2010, the West Kowloon Cultural District Authority commissioned three well-known consultants to carry out the overall design for the cultural district. Of the three schemes submitted, one was selected as the main scheme. However, the average total scores of the three consultants were similar, with an average score of more than 3 points (5 points being the full marks).

In addition, when Planning Department was first undertaking planning studies for Central Harbourfront, it offered four design concepts to which there was public consultation and a vote. Finally, the votes for the first three designs ranged between 180 and 217, which were considered quite close.

As a huge amount of investment is involved for Site 3, those developers who have the capability will definitely partner with the first-rate architects, planners and landscape designers to work on the project. It is believed that the final scores of the three highest ranked designs for Site 3 will not vary significantly from each other, with the score of the third ranked scheme will not be more than 15% behind the score of the first ranked scheme.

On the other hand, Site 3 will involve an investment that is huge in sum and long-term in time scale. It is expected that only four to five developers and consortia have the capability and interest in bidding for the site. At present, prospects in the commercial real estate market are still uncertain. With vacancy rates very likely to continue to increase, developers' investment projections on commercial land varying greatly and coupled with the number of participating developers expected to be small, it is expected that there will be significant differences in final bids received. 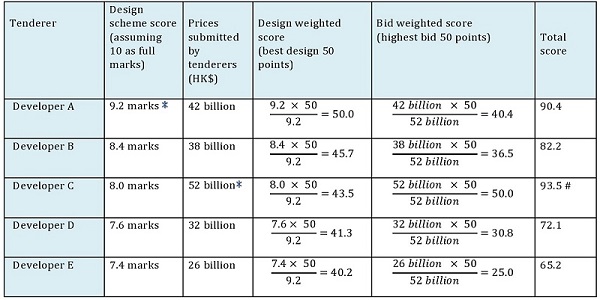 Combining the analyses of design and price as mentioned above, Table 3 shows a hypothetical example of the distributions and predictions of design scores and price bids. In the example, Developer C offered the highest price of HK$52 billion, and thus is given a full score of 50 points in terms of price weighting. This means that even if Developer A gets the highest score for design, and its price was ranked second highest, it would still be unable to win the tender. It can be seen then from the example that Developer A, with the highest design score, needs to bid more than HK$45.22 billion before it is able to surpass Developer C to win the tender.

We estimate that the highest price bid for Site 3 will be about HK$52 billion, which converts into as much as HK$1.04 billion per weighted point given for the score for design. With the bidders offering lavish fees, the design scheme would surely be a contest among the largest and best architectural design firms. The expected quality of the subsequent designs is such that it is difficult for anyone to race ahead of the other opponents in terms of the design scheme score. It is therefore expected that the sale of the commercial land on Central Harbourfront Site 3 will ultimately depend on the developer's price bid rather than on the design.