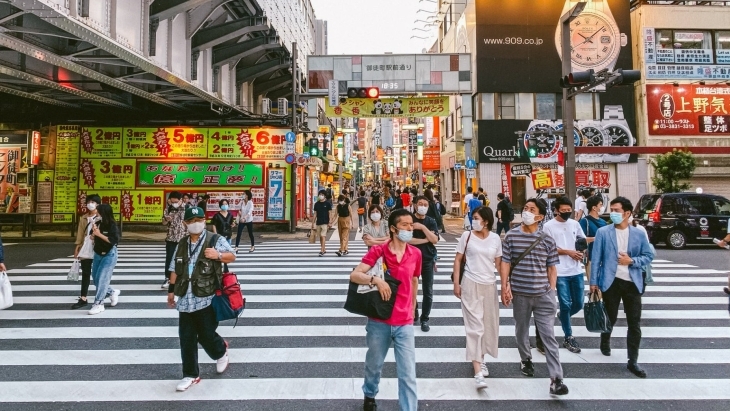 Tokyo’s Central five wards area (C5W) has always witnessed a regular inflow of people every year, causing rents in the region to steadily increase as well. Enter COVID-19, and this steady growth has been dramatically disrupted due to the significant demographic shift in the region brought about by the prevalent work-from-home setup.

A recent report by Savills cites data from the Ministry of Internal Affairs and Communications which says that in 2019, more than 10,000 people from other prefectures moved to the C5W, which represents about 0.9% of its population. In the same year, around 3,000 residents of the C5W moved to other parts of Tokyo, mostly the other members of the 23W, resulting in a net increase of around 7,000 people in the C5W submarket. A majority of those moving into the C5W are young professionals between 20 and 29 years old, who historically relocated to the capital for employment purposes.

“However, these population dynamics have been completely re-shaped by the pandemic. Looking at Graph 6, 2020 saw fewer people from other prefectures move to the C5W, and there was even a population outflux to the nearby prefectures of Saitama, Chiba, and Kanagawa. At the same time, more people from the C5W moved out to other parts of Tokyo,” says Savills. 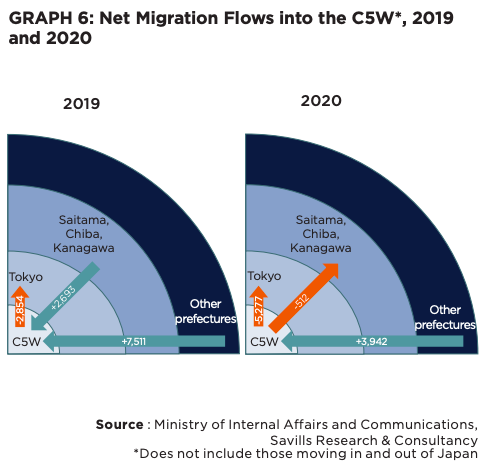 Upon inspecting the population changes more closely, a deeper insight can be gained about who is moving, and where they are moving to. For instance, the largest population declines in the C5W in 2020 were from the 30-to-39-year-old, 40-to-49- year-old, and 0-to-9-year-old age groups, suggesting that many younger families contributed to this change. In terms of where they are moving to, other cities in Tokyo and neighbouring prefectures (Chiba, Saitama, and Kanagawa) are unsurprisingly major destinations. Larger housing in these prefectures are more affordable, and are still commutable from Tokyo, and these factors in combination with increased remote work may have prompted some to move.

On the other hand, the 20-to-29-year-old category has been the least affected, with both 2019 and 2020 seeing a net increase of approximately 9,000 people in this age group, which largely offsets negative trends in other age groups. Considering that the major source of net-migration in this age group comes from other prefectures outside of Greater Tokyo, they appear to have less propensity to stay or return to their hometowns. Nonetheless, there were fewer people in this age category moving in from other prefectures. This decline was perhaps counterbalanced with an increment in the number of people moving into the C5W from the rest of the 23W, likely by those who saw the opportunity to move into the C5W at more affordable prices.

When looking at trends by gender, women have a higher propensity to come to and stay in the C5W than men, although this tendency is admittedly also present in the whole of Tokyo prefecture as well. However, there were fewer women in the 20-to-29- year-old category that moved into the C5W in 2020. As of August 2021, Tokyo prefecture has around 260,000 more women than men, showing that this has been an ongoing trend in the prefecture.

More recently, population declines have continued in the C5W since August 2021, though the rate of decline is slowing, particularly among the Japanese contingent. While the C5W has lost some of its lustre over the past year, the numerous redevelopment projects planned in the submarket should reignite its appeal. For instance, the upcoming Toranomon-Azabudai project in 2023 looks to add new office, retail, residential and recreational space to Minato ward that should spark increased interest in the area. Other plans in the pipeline include the Takanawa Gateway project and the redevelopment of Shinagawa station area. Overall, the future of the C5W remains promising with these projects looking to revitalise the submarket as a residential area, especially Toranomon-Azabudai area in the near future.