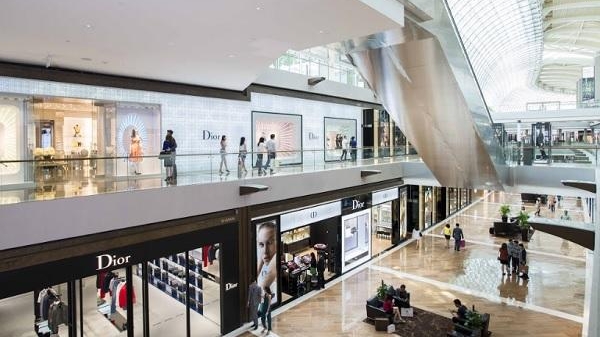 Major retailers such as Naiise, Dimbulah Coffee and Manekineko had to shut down their stores.

According to a recent report by Savills, net demand in Singapore’s retail market stood at 151,000 sq ft in the second quarter of the year, signalling that market sentiment remained relatively positive. The island-wide vacancy level was stable at 8.5% despite a slowdown in the takeup rate during the quarter.

While the vacancy level in the North-East Planning Area rose by 1.4 percentage point (ppt) QoQ to 6.4% in Q2 due to slow take-up in the newly completed Northshore Plaza I, the other parts of the Suburban Area saw an uptick in occupancy levels. As a result, the overall vacancy rate in the region eased by a mere 0.2 of a ppt QoQ to 5.0%, the lowest since Q1/2016. This is likely to be supported by higher footfall from residential areas as most people resumed working from home. 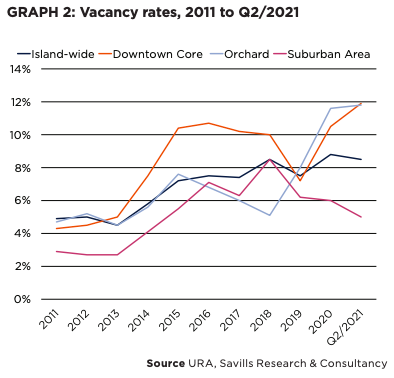 Meanwhile, the vacancy level in the Central Area increased across the board, hitting record levels in every sub-area. This is attributed to subdued demand as the office and tourist crowd is still far below pre-pandemic levels. As the impact of COVID-19 on the retail market persists, there were a few closures of major retailers such as Naiise, Dimbulah Coffee and Manekineko who had outlets distributed island-wide. However, as many of these retail spaces were concentrated in the Central Area, the numerous closures also put pressure on occupancy levels in the region.

Nonetheless, the retail rental market showed some initial signs of bottoming out in Q2. The Urban Redevelopment Authority’s (URA) retail rental index for the Central Region fell by 0.5% QoQ, the slowest in the last five quarters of decline. While rents in the Fringe Area also decreased by a moderate 1.4% QoQ, in the Central Area they remained flat from the previous quarter.

Rents in the Central Area are more likely to be supported by some rental recovery in the Central Business District as more people return to office. On the other hand, owing to muted tourism numbers, the overall sentiment in Orchard Area has remained weak. Savills monthly prime rents in Orchard Area continued to fall by 4.8% QoQ to S$21.70 psf in Q2/2021. Coupled with stronger footfall and occupier demand in suburban malls, prime rents in Suburban Area softened, down 1.9% QoQ to S$23.60 psf (Graph 3). 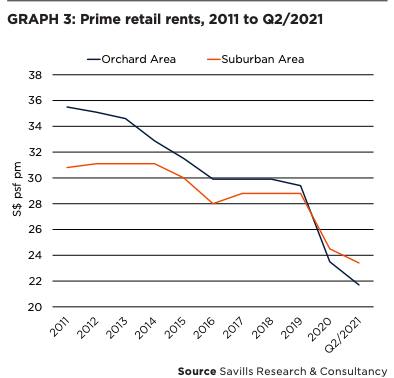