According to Knight Frank, the Asia-Pacific prime office markets lost much of its recovery gains generated in Q1 2021 as many countries were caught by a resurgence of infections, mainly caused by the Delta variant, which led to many dialling back their re-openings and re-tightening their movement restrictions.

While many economists still expect GDP growth to remain largely unaffected for the full year, the re-imposition of movement restrictions has set back operating conditions for the office market, further hampering what could have been the potential normalisation of market conditions later this year.

For Q2 2021, Knight Frank’s AsiaPacific Prime Office Rental Index fell 0.8% quarter-on-quarter (QoQ), led by Bengaluru and Shenzhen which recorded rental declines of 3.0% and 2.5% respectively during the period. On an annual basis, the overall index was down 4.7% year-on-year. Vacancies in the region declined by 0.1 percentage point during the quarter to 13.4%, as major markets such as Shanghai and Seoul’s improvements in occupancy balanced out the declines in others such as Tokyo and Bengaluru.

Going forward, we continue to expect office market conditions to remain lacklustre for the rest of the year, with some upside that the rate of rental decline could decelerate towards the year end, supported by vaccinations reaching a population majority. As such, we maintain our forecast for rents to decline at a slower pace for the full year compared to the 4.8% decline seen in 2020.

Office markets across the major cities in the Chinese Mainland saw rents sliding on the back of the large amount of supply that is expected to come through from 2021 to 2023. Rents fell by 0.7% QoQ, a faster pace compared to the 0.3% decline recorded in Q1. Among the Tier-1 cities, Guangzhou outperformed during the quarter with a 0.6% QoQ uptick in rents, mainly due to improved absorption. There has been growing interest from more occupiers to set up their headquarters in the city.

Bangkok’s office market recorded a contraction of 0.3% in its prime office rents QoQ in Q2, driven mainly by rental pressure from a large supply pipeline over the coming 3 years and landlords lowering their rental expectations to secure tenants in response to the sudden drop in demand following COVID-19. The market is expected to continue its current downtrend path, moving away from the recent cyclical peak, and shifting further into tenants’ favour in the short term. However, we remain constructive over the medium- to long- term as we still see leasing deals being concluded despite these occupiers having 80% to 100% of their employees working from home.

Demand across India’s office markets remained expectedly soft, due to the second wave of the pandemic during Q2 2021. Across the three Tier-1 cities of Delhi NCR, Mumbai, and Bengaluru, we saw average occupancy levels falling 4.3%. Bengaluru and Mumbai recorded QoQ declines in rentals of 3.0% and 1.9% respectively. Delhi NCR was the exception, experiencing a 1.0% rise in rents, owing to robust transactional activities in H1 2021.

Still, with the relatively strong performance and hiring which the IT sector saw during the pandemic, office demand remains resilient, especially as vaccination milestones are being achieved. Gross absorption during the quarter was still 39% higher year-on-year for Indian markets. There are reliefs from the supply side as well, which previously had been a concern, as both ongoing development and construction are either delayed or scaled back. 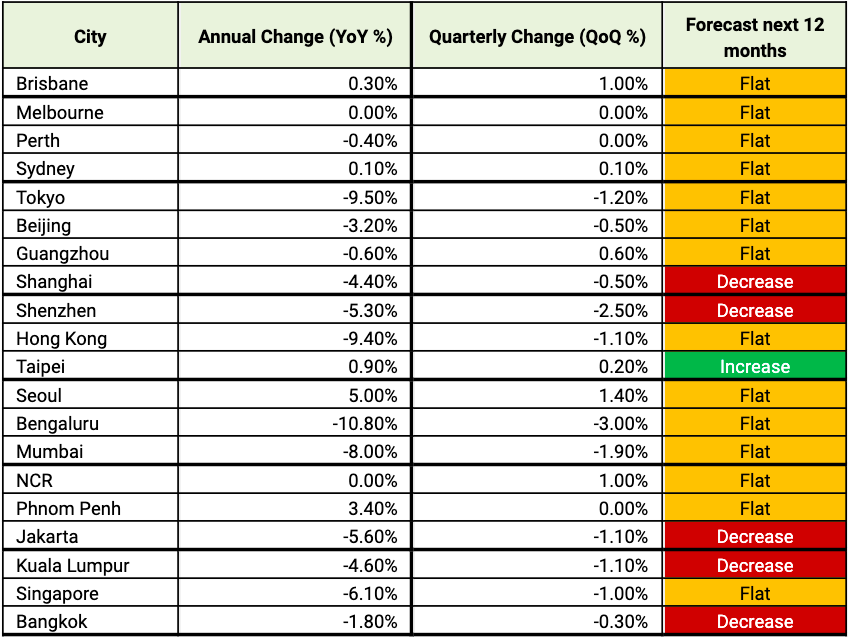